Yellow Cat Productions, Inc. is an award-winning video and film company offering a full range of production services. We are located on Capitol Hill in Washington, D.C.

Yellow Cat began in 1972 with “Homeplace,” a folk documentary about agrarian life in Mississippi. The company was incorporated in Washington, D.C. in 1980.  Our productions have included documentaries, PSAs, VNRs, corporate communications, public relations, international broadcast news, and Government programs. Our staff is composed of multilingual professionals who have worked extensively in the U.S., Europe, Africa, Asia, and the Caribbean.

In 2013 the Homeplace archive was added to the collection of the Amercian Folklife Center of The Library of Congress. Soon a photography book project was started. This resulted in a seven trips to Mississippi for a non-linear documentary and several thousand still photos over the next several years. The book North Mississippi Homeplace is in production by the Library of Congress and the University of Georgia Press. It is scheduled for release in May 2019.

Since completion of the documentary we have ceased commercial video production in order to work in fine art still photography. Personal projects in Senegal and Berlin are underway. 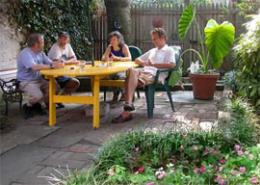